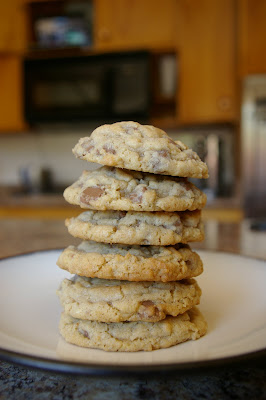 This recipe was given to me by my Mother-in-law, Ann. Delish!

*** I find that its best to add the oatmeal a cup at a time. I also only use about 4 1/2 to 5 for a whole batch. You are looking for a sticky ball that isn't too thick, be conservative. Cook the first batch and you can see if they spread out and become thin = add more oatmeal.

After the oats are mixed in pour in milk chocolate chips and mix until just combined. Use a mini-scoop to create uniform balls and pat down the tops to make flat one inch-ish cookie dough blobs. Bake 400 degrees for about 6 minutes - just until the bottom of the cookies are starting to turn golden. (the tops won't turn golden - try not to overcook.)

I usually make a half batch and stick some in the freezer in an air tight container to enjoy later. 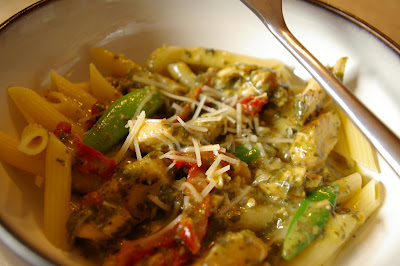 This is, by far, one of our easiest and most favorite meals to make at our house.

Start by cooking your chicken. We generally have the frozen - boneless/skinless chicken tenders in our freezer. I take about four of five tenders and cook them on medium-high heat in an oiled skillet. I season them with: Lawry's , garlic powder, fresh cracked pepper and Italian seasoning (basil, oregano, thyme, marjoram, garlic, rosemary). After one side has finished cooking I add 1/4 of an onion, diced. I remove the chicken and onions from the heat and chop the chicken into bite sized pieces.

Sauce:
Pour a cup of milk and 1/4 cup (only 1/4 because we will be adding more pesto later) of EVOO in a saucepan over medium heat. Dump in Knorr Pesto mix and whisk until it begins to thicken. At this time I usually add the sundried tomatoes and an extra 1/2 cup to 1 cup of the store bought pseto. Once I've tasted it and have teh desired pesto-y flavor I add in the chopped chicken/onion mixture and a handful (eeehhh... 1/2 cup or so until its nice and thick) of shredded parmesan cheese. At the very end when my noodles are almost finished cooking I add the sugar snap peas to the sauce and put the lid on.

To serve: Mix the noodles with the sauce until they are nicely coated and sprinkle with parmesan.
This could probably make 6 to 8 servings but with our family of two we tend to make a batch and have DELICIOUS leftovers.
Enjoy! 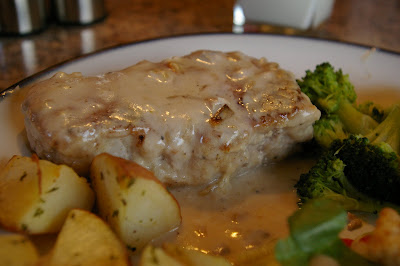 Dang! I hate it when I forget to take a picture of my finished product before I slop everything on my plate... Sometimes I'm just too hungry for a good picture.

I'm not quite sure how I know this recipe but it's pretty tasty.

Heat 3- 4Tbs olive oil in a pan on medium-high.

Also make a mixture of flour with with the pepper and Lawry's in it.

Dredge the seasoned pork chop in the flour mixture and sear the coated meat in the HOT frying pan. two minutes or so on each side, try not to touch it until the two minutes is up so a nice crunchy golden crust is created. I also add in 1/4 of a chopped onion to saute with the meat.

While the meat is searing pour one can of cream of mushroom soup into an oven safe baking dish. Mix the soup with (approximately)one soup can full of milk and stir with a fork until the larger bits of soup are broken up. Add the sauteed onions to the soup mix and then the pork chops. Cover the chops in soup mix. Bake, covered in foil, at 350 degrees for 30 -45 minutes depending on pork chop thickness. 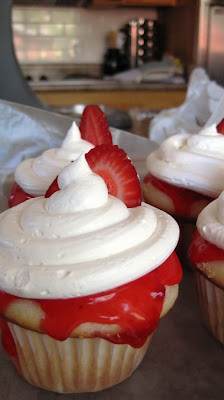 This is one of my favorite cakes that my Mother in law makes. I turned into a cupcake. BOTH are DELISH!!!
You will need:
Cake
1 Pkg White cake mix
Glaze
1 Pkg Danish Dessert
1 Pkg Fresh strawberries
Frosting(aka BEST FROSTING EVER)
1 8 oz. Pkg of Cream Cheese
1 16 oz. Tub of Cool Whip
2 cups Powdered Sugar
Step 1: Bake Cakes
Step 2: Cream frosting while cakes are cooking. Refrigerate.
Step 3: Follow Danish Dessert instructions for Glaze. Chop up fresh strawberries.
Step 4: When the cakes are cooled poke holes in the top of the cakes with a straw and spoon glaze/strawberry mix over top.
Step 5: Put cakes in the refrigerator for at least an hour - or the freezer if you are short on time.
Step 6: Pipe frosting onto cupcakes and garnish with strawberry.
Posted by Cass No comments:

The wost part: Cleaning the Chicken. The flavor is best when you buy bone-in chicken with skin. Remove all the skin/fat and rinse in cold water.
Put 2 large sheets of heavy duty foil on your counter. Layer onions and chicken and season with pepper, minced or chopped garlic and thyme. DO NOT USE ANYTHING CONTAINING SALT.
Wrap up the chicken by folding the foil over the chicken (creating a handle).Make sure to fold the foil in a way that makes the package water-tight so that no juice with seep out. 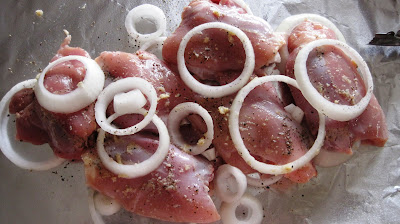 Preheat grill to approx. 300 degrees and place package in the middle of the grill. Close and wait one hour. 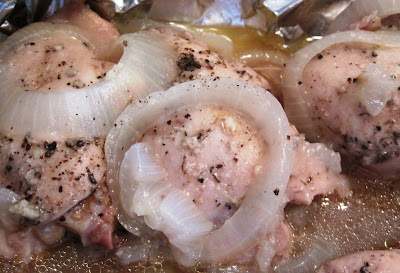 This is what the chicken looks like after the hour is up. Remove the onions and save the juice in a bowl. In the bowl of juice add your favorite BBQ sauce and mix together. After the sauce is mixed put the chicken in the same bowl and return to the grill to add a little crunch on the chicken- basting frequently. 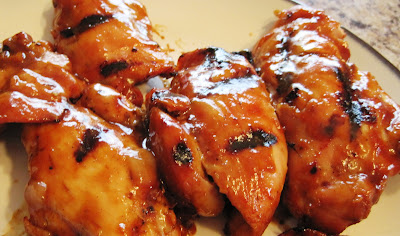 We like to save the excess sauce just in case we need more during dinner. This makes the most perfect moist chicken. Delicious! 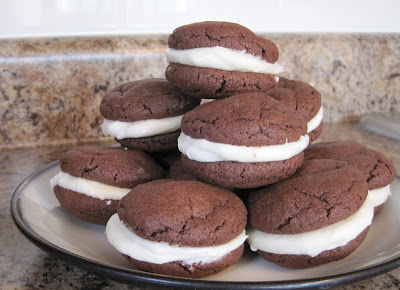 I LOVE cooking and love eating even more. Here are a few recipies that I enjoy!